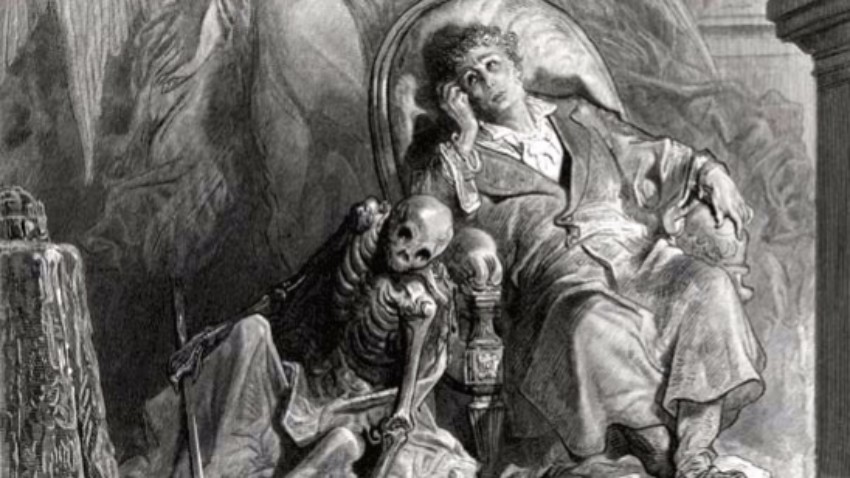 There has been quite the commotion regarding the notion of lucid dreaming
But I, Dr. Rodrick Edgar Moore have not found reason to subscribe to such notions
As I have never dreamt, in a manner concerning R.E.M. sleep, nor have I seen these so-called nightmares
In my thirty one year not once has a night been filled with ghastly impressions of fantasies during slumber
People claim that I have an ill disorder or simply I do not remember what I’ve seen…folly I say
For my mental intellect is unmatched by any other cerebral scholar, and my memory, photographic, as one to guess
There I proceed that the world is riddled in an illusion when the moonlight shines, that I am forever exempt from
Although, I am curious of these nocturnal delusions in the hours that are nigh, in the hours that come with eerie sighs

It happened!  a phantasm occurred, it was strange…far more abstract than I would have anticipated
Let me think,  white doves over a sapphire sea, seven stars and the words “follow me”
But,  where I wondered, there was nowhere to go… the water became black and those doves…ravens
I saw nothing, then a scream….among the inferno I walked trudging this dismay
To wonder if I had died and if hell was my  fate…the horror I saw faded a swiftly away,
Confused finding myself screaming, and to my surprise, the scream earlier was I, what’s more
The doves I envisioned before where at my window during my awake; am I still dreaming I wondered

Again, I drifted into obscurity this time I was flying among the clouds and the sky
Defying gravity’s will upon me, beloved was this imaginary simulation made real, I viewed it all
The city Greece along with Verona, the streets of Rome where a maiden stood benevolent with scarlet hair
That burned akin to the essence of the sun, igniting my heart captivating this dream and a story yet to be told
Are you Hephaestus she asked of me, I replied, be I might be if you are my delicate flower known as Aphrodite
A lightning bolt struck the ground between us and I again awoke, My morning-after seemed overly mundane,
The colors of the trees as well as the hopeful sky were stained as bland, as I felt as if I had lost someone I loved

What are these dreams I did not believe existed I wondered,
How can something fictitious make me feel something so real,  I looked at the world dumbfounded,
Slightly more so perplexed than amused, and there she was my muse, manifested, a deja vu
In the town square where I lingered to contemplate my worrisome thoughts,
She with her crimson locks smiled at me while standing under a statue dedicated to a Vulcan god
Fear flooded my soul, was this reality I inquired unto my own life, curse these dreams, I will sleep no more

Exhaustion gave way, after two nights in a sleepless state my vigilant will crumble
Into a fable nightmare, I trudged paranoid to every visual furthermore to every sound
Time became hyperbolic, distorted, therefore edging as I in dismay… when am I, I implored
“Is when such a thing?” an omnipresent voice asked unto me,… “I believe so” I answered
“Why” it continued to question,… “because time is relevant” I whispered unto what was not
“Even in a dream Rodick?” it continued more… “Yes” I replied as I tried to identify this anomaly, this shade

We kept going for a while, it would ask and I would answer
I found myself looking into a mirror hollowed and plated gold, intelligently crafted, thus rare
Which revealed unto me a truth, for some time now I have been among the deceased, eons really
And what I perceived to be my life was in actuality dreams forged by the forgotten
From a maiden of red hair to the white doves that sat upon my window sill, all lies to cope with this eternity
Yet, what was to come, now that I realized the truth, that I perhaps may have already discovered herein this limbo

Reality for the dead is but a dream, and the symphony that plays in homage to said dream is a requiem
I am Dr. Rodrick Edgar Moore, and in my thirty-one years of life, I have never had what some would call a dream