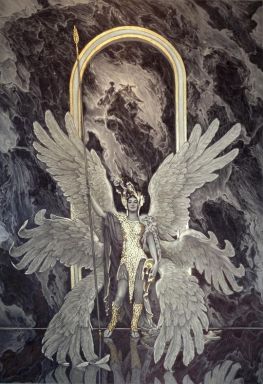 For too long I have forestalled what was simply meant to be fortolded… To what was simply meant to be herald with an everlasting dawn
Embedded so within the sacrificial blood, that now aims towards the firmament…
There at last it is, the sound, which, I have come to abandon
Amidst the whispers pertaining to armageddon, there I stood and I cowarded…abridged to deny transfixed souls
Him, and I nephilim of the same coat…Brothers to our father’s madness, twins inverted for a time and a time again, thus it is all quantum
Out the bosom of hell and fire I came here to reclaim Eurus who I hold so dear, yet, a serpent’s tongue to bare…a lie there to gate my escape

“Of the tree there is knowledge, take of this fruit and surely they shall know life” – thee angel spoke

Thee angel that stood before me, glared at me with hollowed eyes infused with a heavenly ether, burning slowly, thus earnestly
Tilting his spear so towards me, as it wavered with a sentiment of vertigo;… another bond so entangled by time, an event there to juxtapose
Accordingly, arose a permanition, which swept across my eyes, hence into the ruby irises given unto Raphael was a vision vivified…
For a glimpse, and a glimpse to fade unimposed, as well as, the remembrance pertaining to tomorrow I simply can suppose…

“My destiny shall NOT be preordain to the will of a lost, and yet, SELF-deemed, divine god” – I proclaimed

…Consequently, an aim was at arm…

The air became stricken with a great fever, as a great pause eloped, and with readiness and great force was thee angel’s spear thrown
Then, severely sound divided itself and lighting became born of amethyst…
A somewhat cure to the pigmented night echoing images of the stars
However, I jousted such lewdness with angry; suffocated only by a devil’s fury causing the earth to tear, thusly, therefore to bleed
Sentiments belonging to a broken creed…There in the depths the horrors of my home screamed, the bones of my convections sought to feed
Thee hour struck midnight, evening thy fading moon, corrupting a sigil, which held my tattered nightmares

Unto my hands befell three stilettos…proclaimed as Vendetta, Amentia, and, Tormento… all thrice dressed in ebony, obsidian, and black
Here, to my will, would they, and did they dance so, as if they were dying, rose petals trapped within a dark vortex enjoying their own demise
A storm emerged  in the land…
And two, thee angel and I, episodically tilted, captivating with a remarkable awe thee other celestial nine…Jewelry

For, his lance moved with a speed akin to that of shooting stars and my trinity tore throughout the four winds baring a terrifying tyranny
A genesis to spark a loveless tale regarding those barren tomorrows;…
Thus, as we stepped closer toward armageddon, the triarchy that I juggled edge closer and closer still towards thee angel’s demise

Fatally, the Vendetta trespassed upon my advisory’s heart, henceforth drinking and corrupted his hallowed blood

But, with a sigh and dimming whisper the angel utters the word “ ultra…”
Composing himself, and holding his weapon upright he flocked beautifully his six hidden wings to gild his image in glory
As he dared to stare at me as if he was victor… as if he was to claim the title “ Trionfante ”
“ Why have you come from the dominion black flames and brimstone…Why are you here? ” He asked of me
“ I came to seek an audience with Aurelius, yet, you and your spear stand unfortunately in my way” I to reply

Thence, at that moment I held tighter to Tormento in my left hand, and Amentia in my right and without a blink I began spriting at him
Intensely did my blood pulsate as I smelled his blood in the air…raging with a smile like the demon I was… I was however was halted

Thee Angel opened his mouth, and out of it crawled a serpent so silked in alabaster
Onto the ground it fell, then it glared at me with ruby-colored eyes that shifted sapphire…
Quickly after a pair of wings shot from its spine thusly, lifting the serpent above me as the moon kissed it’s back

“ Why do you dare seek an audience with me, Son of Lucifer… Who are you to be adorned by my presence?” – Aurelius hissed unto me

Yet, to speak of things Aurelius spoke saying  “What you seek foolish whelping is a rebirth…”

Ren'ee Verona
December 19, 2021April 4, 2022
The vibrancy that encompasses the evening sky, which speaks of your benevolence, does so in a way, so painted, thus...
Ren'ee Verona
October 27, 2021
...Black From the heavens a single drop of silver fell towards the earth, pearled in its own divinity it gleamed...
Ren'ee Verona
October 18, 2020November 16, 2021
A color that I have almost forgotten sits so dearly upon your lips, and here unto you I offer, a...
Ren'ee Verona
July 25, 2020August 25, 2021
Within a foreign whisper, I spoke unto you fond memories of what was to be our destinyAnd beneath the night...
Ren'ee Verona
March 29, 2020November 16, 2021
Parables are set among the graphite echoing justly with thee ages, yet becoming brittle with time, This waltz that we...
Ren'ee Verona
March 3, 2020August 25, 2021
[ Phobos: Holy terrors to tread along these waters beloved Deimos, the liquid is suffering more as he endures more...
%d bloggers like this: