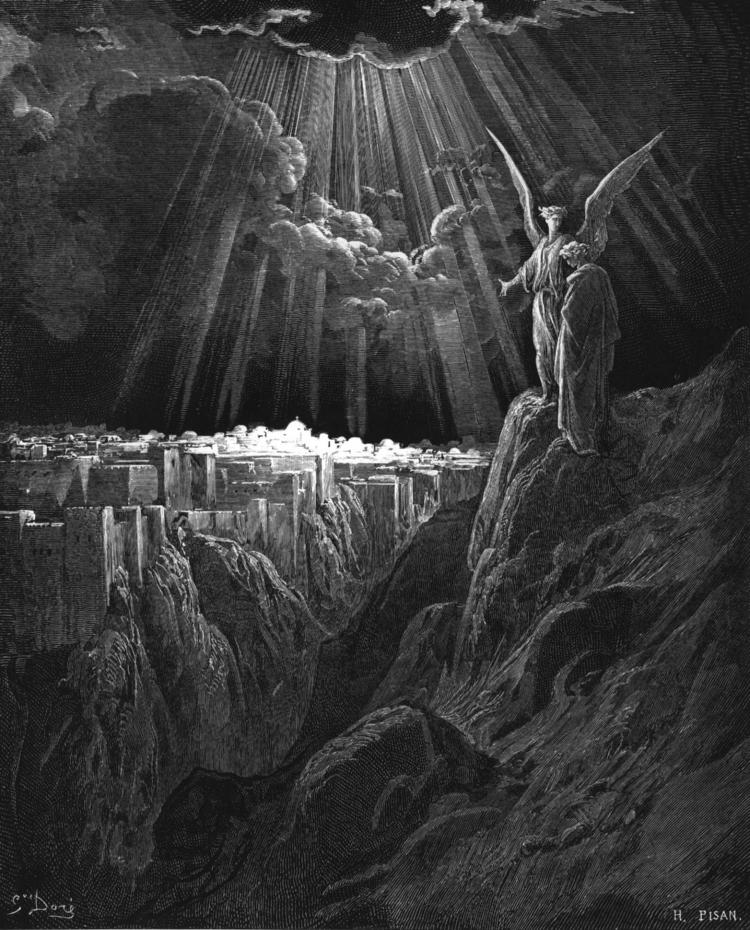 Into a promised land gifted unto man was I…and there I stood in awe, fairly astonished by Eden’s beloved bosom; a muse handed timeless
Delighted, like the decorative souls of stone forever trapped gazing upon the people found descending towards, and dreaming of the morn
The vox populi to praise the sun, gandering at this crystal citadel plated cosmic, one aligned to Orion duly confessing its destiny
Inked in a color privy to lividity, the bewildering sight of three above three spoke to me, that time was shared dimensional between
Therefore, heaven sings, as hell feasted upon the deceased, purgatory shades in wonder bearing thee essences of Eurus’s beauty

A voice steady to echo guiding me…

“ Erebus, come and see…peer upon a part of man’s world before those four morbid steads are set forth for the culling
Inauspiciously weights an along waited forlorn hope inscripted, although, hereto lost among thee beloved Tigris and Euphrates”

Eden, the earthly home belonging to gods and angels gave unto Gaia three monoliths as to immortalizing that of three,
Sapiens were born from an abundant cluster of primordial stardust perfected in a garden by his own holy hands to maintain a gilded lily
Bearing that Babylon was soon to come and that a serpent crawled ever closer… as man who sinned more, the more
Unfavorable will be man’s misfortune as they will speak of their paradise becoming lost, and that tribulation rose from one regrettable act
However, free will tied with my father continues influence will aid man in a number of sins before they are to be cast out towards the eve

Arrogantly, in ignorance art these humans to repeat a scripted tome…A test for thee angelic spirit to be
Forever do they choose knowledge over life…Forever do they not realize that heaven instills both, simply, if only they would adhere to thee
Unlike I and my brethren born thereof brimstone relinquished unjustly of celestial hope…Descry, It’s as if the universe itself is screaming
Bleeding a quoted mockery stuttering my curse… In lieu towards this was I to wait a millennium and a millennium thereafter
Thus, I witnessed the fall of that harmonic city known as Eden and the destruction pertaining to its beloved bioluminescent gardens,
A golden fleece burned to ash… A rise great Babylon heeding the sights of Gomorrah bearing a deluge as to divide

In those years I observed man as to understand why they were given a sort of clemency in life…a soul that could be adjusted before death
What made them his chosen above I and my kin, thee angels and even over his only begotten son…who all were given plated spirits
Fixed unto us that we may never be opportunistic to surely deny a predetermined godly flaw
In time I took upon mankind’s mannerisms and likenesses so I that I could walk among them, a thorn lily-fied
Courting kings and queens, peasants and priest, thusly like, my dear father Lucifer did I too tested man’s resolve…

Merely by presenting the fruit sin…

The lustful were given an insatiable desire for taboos of the flesh
Thy envious ones were given a deep insecurity plaguing the thoughts regarding self, as those of gluttony laid unsated
More they shouted and begged for in the ears of the lot that stood with blinding anger tampering their impulses
Blood soaked and stained was thine hands as they were given a means to crucify even him proclaimed as thy Lord
Weary art always the slothful ones careless of the soul and the body, given anything because everything turns to ruin in their wake
However, the some that drown themselves and gold, ergo greed took from all so, in all laid what was to be given, but not their own souls
Then, alone I walked shoulder to shoulder with men haunted by a given pride… the primordial sinners steadfast in self
These cretins dressed in vanity upheld a hollow virtue and were given nothing but the tears of those harmed by their misguided selfishness

Earth became in a way like home and I grew bored…until one day in the wilderness he came to me…
He spoke to me as I tried worthlessly to tempt him “Look” I said “all this could be yours now, as you stand as one of them”
Yet, He replied, “All belongs unto my father”…What of Eurus I inquired …“Aurelius” was a name he quoted
“We are destined you and I,” he said unto me “ brother bound to a cosmic animus in which even our fathers could not forestall”