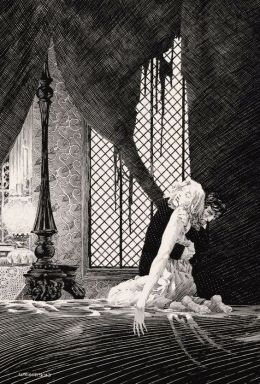 Here I stand the herald of ash and thunder weeping at the sight belonging to a vigilant destruction
Perils lie in this event title eerily as the hour of “Lilybane” a derivative so dire, her lips only knew simply a willow berry’s taste
Beautiful too, she stood during a violent tick-tock as her hair curled like rose petals withering amidst an ill-begotten flame
Obsidian was my tongue as I preached outwardly concerning a prelude glorifying that which was to come
As the sky went from cerulean to serpentine much like the irises openly peering at me as I agonized hereafter

“Dear Lord,” iris flowers spoke unto me, whispering “The city has fallen, thus alone you are now, thy hand and justice… thy scale and weight”

Some time ago before I became bedeviled I journeyed in a dream and dreamt something heterochromatic, thus chaos ensued
A different shade pertaining to the same skin, a shift in color, although, what one should have seen clearly was the same view
Day and night merely echoed to divide time, coincidently the thoughts tied to time became notions irrelevant to what was eternal
I must admit my morals blurred, so forth came the thunder upon Babylon, so forth was the rain, but bone ash stitched together with soot
The great metropolis that I have built and the natives belonging to that Eden begged for mercy as I tore asunder their lives
Yet, In my perception I…, I believed I walked in their praises immortalized for saving their souls from thine own wickedness

One by one they screamed redemption and repentance, therefore I heard liberation at the tip of my swords
Blessings to the names for redemption rested in my right hand, thereby repentance gripped tightly within my left…
Deafening, tilted the sounds playing about this ongoing melody… a tale regarding two…thereof man and the might, stemming from a god
Henceforth, I now wonder thus smiting those that were destined to decay upon my wake, deem me as said god
Or am I anointed more so as a sinner held in lux or, in lieu of light in those fated to bear my gifted wrath

… I am conflicted with my own awe it would seem…

Divinity tends to arc in a twisted tailored two-tone for all, thus themed as a tragicomedy retaining both things blighted and bright
Saturn so scorned in red, kissing blissfully a Jupiter jaded blue, and no longer do I view the silver mask sighted over a waning moon
Whereas, the vision dawns a crescent evening viewed in graphite, illuminating arrows that fell as roses purposefully to honor the now dead
Purpose, which I have come to parley…digressing endlessly regarding this convoluted aspect

“ Dear Lord,” whispered the swaying daisies, dancing in our garden of discord and disparity

Beautiful was she, for she was like prolific flower petals and you, her unwavering stem… yes, she was flawed but was she ever elegant
Dare, but a taste of sweet willow berry wine to last as we hope it will nourish these roses blooming under a transformed evergreen sky
Crimson with scarlet stains the holy sheen exalting thy right and weight, seen thy scale and justice, what is light if born of sin we wonder.”

What of sin if God parallel to the heavens interpreted such happenings to be right…There, Ovid in a dream lies an equivalent paradox

Ren'ee Verona
March 11, 2022March 30, 2022
“Lie unto me, sweet tomorrow, a gifted portrait displaying my baptism…framed in alabaster and ivory, one simply coded pearl like,...
Ren'ee Verona
December 19, 2021April 4, 2022
The vibrancy that encompasses the evening sky, which speaks of your benevolence, does so in a way, so painted, thus...
Ren'ee Verona
October 27, 2021
...Black From the heavens a single drop of silver fell towards the earth, pearled in its own divinity it gleamed...
Ren'ee Verona
March 24, 2021March 30, 2022
For too long I have forestalled what was simply meant to be fortolded... To what was simply meant to be...
Ren'ee Verona
October 18, 2020November 16, 2021
A color that I have almost forgotten sits so dearly upon your lips, and here unto you I offer, a...
Ren'ee Verona
July 25, 2020August 25, 2021
Within a foreign whisper, I spoke unto you fond memories of what was to be our destinyAnd beneath the night...
%d bloggers like this: