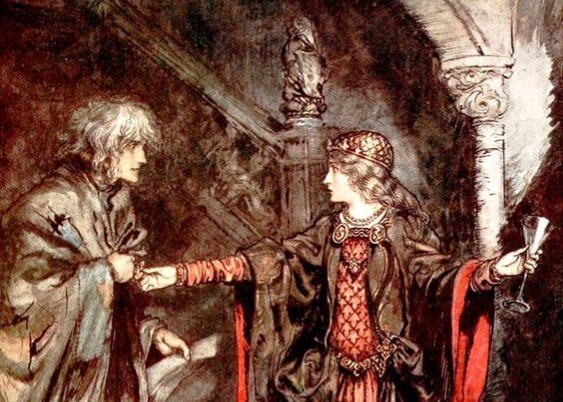 Dear humble jester my tale to continue
One concerning a fool’s misfortune, who thought that he could so love a queen
Yet, in time instead of her affection and a welcoming given unto kings
The dimwitted clown was hereby crowned thereof a royal guillotine, a tragic scene echoing thusly, a fatal c’est la vie

Listen as this story whispers on, as the clouds darken in the sky over the corpse of a dreamer
Beheaded in the reflection of his beloved’s tears, painting a world blue, and grim
Years passed, having the dead to be forgotten, the jester, another fable, and the queen’s departed heart a fabrication

“Dolus dear”  Queen Alexis cried out “ Prepare the hall for a party, I would like for it to be perfect
There shall be music, which feels the atmosphere in a seraphic undertone
Sapphires and diamonds must be embedded among the chandeliers, while ruby colored regalia cloaks our guest
Servants along with all royal retainers will be dress in white, to match the ivory walls…also
Alabaster will cover the stone, angelic statues placed throughout our grand elegant ballroom
And let not forget the heaven’s gold that is to trim it all… Understood.”

“Yes, my Queen” the servant replied

Thusly into the nocturnal hours did the servant prepare such a ball
Having gemstones to flood the ceiling, making one to think that they were staring at an ocean during a moonlit night
The castle was had been wash to an absolute purity, so forth stainless to the eyes
Beaming so much so to glow with a sheen of light, that radiate the angels depicted among the granite stone
“ Bellissimo”  Alexis chanted as she looked upon her servants
With each of them dressed in their snow colored garments that made them peer as if they walked with noble blood

The next morning Dolus knocked at the queen’s chamber door and said
“My queen guest will arrive near the hours of noon, I will accompany you as to announce your presence.”
The queen’s door open…to have had witness the glory regarding a being known as god was lackluster
Divine became a gem that sat as common stone in the wake of the benevolent queen
Ergo, the servant became enchanted causing his eyes to drifted into her soul
Adorned in scarlet but bejeweled with cosmic gold;
Gilded surely, however, what was most beautiful, Dolus would say, is that it was simply Alexis

She was a sight that never grew old savvy

“What do you stare at me so, without speaking?” the queen inquired
“Forgive me, My Queen, It’s just a gesture that justifies your galvanizing holy adjustment
… It’s a compliment really…” Dolus spoke stoically” The queen to reply “…very well I see”

Off to the event, they walk side by side a servant and his highness
TIme alter drifting to the past, as Alexis remembered her dear Jester, yet instead of laughter she forbore a tear
And, although the servant noticed his actions were not

Arriving at that majestic ballroom Dolus announced Queen Alexis to the crowd and they all cheered in her honor
As she walked with grace past the stone angels sighing her essence, under the starstone man-made sky
She found herself embracing the arms of another, one fitted in societies view to cohere a royal affection
And with him, the Queen felt safe, a wonder from the trickster she so loved before… therefore, marry sat all
For hours the party carried on, as the queen laughed and smiled as she did so long ago

“Dolus” Alexis called out, asking, as she excused herself from the amusement
“Why is it that I have never seen you smile?” Calmly he spoke unto her
“My Queen as long as you are happy my heart is smiling, know this and please enjoy your evening.
There art guest waiting for you and only you can fill this room with joy.”

Alexis gave him an intoxicated grin, then rejoined the festivities
A cold vice lingered upon the servant and a voice befell his hears “ Dolus I know who you truly are” proclaimed another
“It’s not hard for a balatro to fake his own death, you changed your appearance a bit, but, I know it’s you; why not tell her the truth?”
Dolus replied “ Look at her, she smiles like tiger lilies reaching out desperately  for the sun,
She dances like her heart was liberated from the gravity that confounds us all, and I ask, who am I to interrupted her happiness,
Let her dance in this life, for I am content, as long as she smiles…Making her days blissful is the only gift I can give, you see…”

Link to read part one — > Queen Alexis & The King Of Fools

Thank you for reading!
My anthology  “The Night Sky ” is available for purchase. –  http://a.co/0pzUVWs
Vlogs – https://youtu.be/vgzLe2Yjv3I