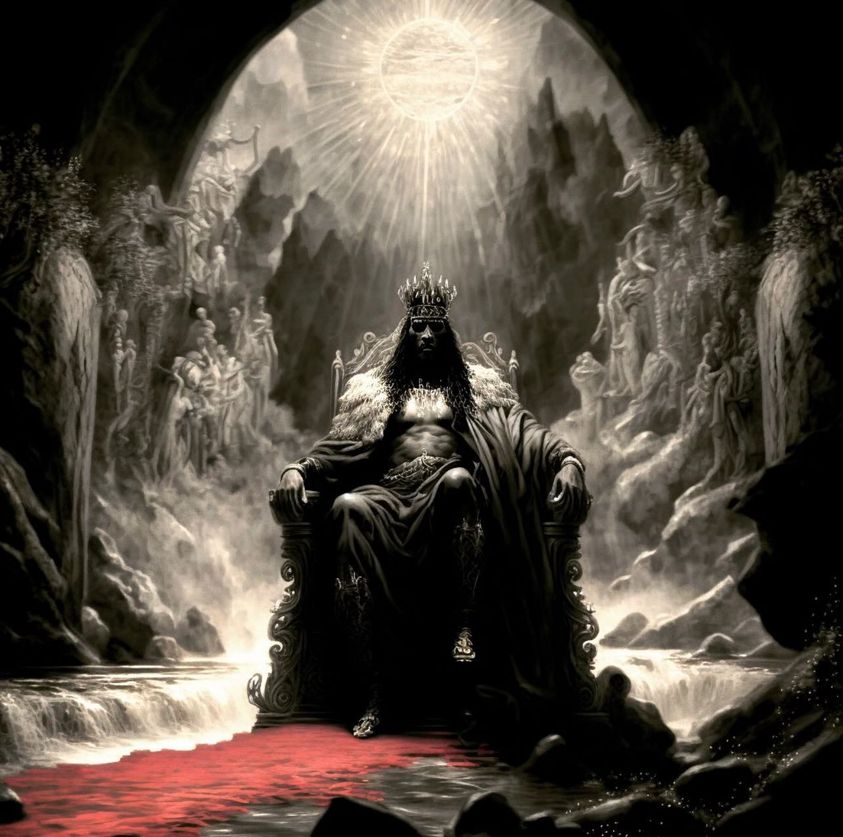 Discord among the nightfall with these winter berries found frozen
Between honeycomb lips of those sweet whispers which speak of a king dress in scarlet
Ebbing at the somber hour when the stars had forsaken such royalty…malice to fill the air
Grieving our scarlet king did…loathing at the sight of his crippling, conscious soul

“What has become of me during this time when I have ruled over man… claiming dominion over their lives
Who am I, surely not a god, however they saw me as such, therefore with my given authority
Passed down from my father, I acted as one, so unto the heaven, I stare, wondering…
Searching for forgiveness as I have committed sacrilege as a deceiver hiding behind a tainted crown”

The intimate peril injected into the veins of our scarlet king; a dilemma held to the complex regarding power
Those whom we worship, who we garnish in jewels, offering dearly gold, revel beyond wasteful vanities
For slowly a coral serpent inches more, quietly does it dreams with poison in a vile vindicating venom

“…I was an undertaker more so than a king…

Walking about pridefully covered in rubies…flaunting, bloodstones if only to hide my shame
In my lifetime wars had to be fought to preserve this kingdom I proclaimed a
And, I as just king in the eyes belong to my subjects sent thousands to die, so that the frighten few may live…thusly
I received praises for condemning those willing to sacrifice, possibly the only reality that they may ever know
Hence, to what purpose, I ask, in the grand scheme regarding humanities providence is it all for
The guilt that I bare, the nightmares I endure, haunting visions reanimating the devil’s calling
As I stare deeply into the eyes of corpses victimized in a culling liberated by I ”

Sinisterly the snake crawled from the darkness gently caressing the king with every intention to kill
Yet, our king did not fear a creature fated to a life where one’s own blood ran cold
He simply gazed out of his chamber’s windows at the moon…that peered back at him in full
Intoxicated by the celestial sight, as well as, the bane that scorned his heart our king could only smile
As the snake bit him, giving back to him what he gave unto others to say… a mercy held by dismay

“ Was I a just King I wonder… The spirits bathing, furthermore, marrow-ing in the river Styx sigh greatly in an animus tone
Forgive me, all those that looked to me as I threw away your lives in a sense of duty
Perhaps, if I was a god I could have been better in my choices, I could have prevented this genocide…
One reigning over my thoughts in this final hour, where everything seems fairly cold, as I slip into an abyss all alone
How will they greet me as I stand beside them in that desolate inferno, what is to become of my weary soul?

The coral snake became benign unto the scarlet king, as he murmured on embracing a volition tied to none
Red unto black, sovereignty denied by heaven’s halo, as a liquid bane corrupted his bloodline, he who the living revered as a saint

Thank you for reading!
My anthology  “The Night Sky ” is available for purchase. –  http://a.co/0pzUVWs

5 thoughts on “The Scarlet King”