As the grave my immortal beloved Rosaline stood silent,
For the hymns of a requiem played from a spear, henceforth guided by one so imperial and so pristine
Who bore six wings, three eyes, and a halo gifted with burning white flames, found forever tantalizing
Thus, bejeweled was his armor as such, gilt plated thereof dimensional gold dressed all to flawless
Having diamonds enchanted by the hands of God to encrust what lied as virtuous
Regardless, I being Erebus, cared little for the concerns tied to seraphic beings or designs
No matter how sublime, whereas if, those of twelve only knew who I truly was,
Surely they would strive even more to keep me from my dearest Rosaline,
But, I was determined ever so to elope, and I would not dare to be denied, not by angels or otherwise

“Give into your fears” One among twelve whispered unto me,
Pointing his spear at me, seeking then to alter my mind’s reality, yet I laughed for my fears were not
Because simply I forgot, given the hemlock of my past transgressions, therefore humbly I spoke…

“In view a creature that has walked in the wake of vitality for countless centuries
I remember nothing pertaining to such an emotion, I like you stand unbound by time
Ergo parallel to the divine.”- Yet what shined imminent became the inescapable

An omnipresent lux scripted a vision belonging to a revelation…the sky shook
Allowing a blinding brilliance to illuminate the landscape vividly…I could hear my blood pulsating
Furthermore, what became more mesmerizing was this celestial being’s third eye…
“Open” A word that kept repeating, sometimes softly other times screaming,
On and on, although I remained paralyzed…unable to move, unable to breathe
It felt as if I was suffocating while falling into a dream…a dream of a bent and broken sensibility

“Forsake your ignorance” The first of twelve demanded of me “I am Raphael
Holy seer observing former events, guardian over the past and all things relative.” speaking so soundly

Finally, the light ceded my eyes then darkness be fell my sight; “Scry” was a cry I heard
Anon to this, I was there, I was here in my past where happenings connected to a somber time loomed
Be it summer too, characterized by the month based upon when the scarlet sages would bloom
Having humming birds to raid the gardens that outlined the royal castle, revered as Citadel Blue…
A fortress wherein I severed often masked as a jester, but an assassin was truly my forte
A sword of the king to eradicate all adverse fools…The scarlet sages around the manor seemed so due
Behold a night when the keep drowned in blood, as a culling was known as the crimson flood
Where I became the black humming bird, making his first grand debut
Singing to my victims, humming to them a crescendo before their final adieu
The moon became full, thereafter the sky filled with tears…my bloodlust became a heavenly fear

“Compared the divine you are filth, demonic to these eyes”
Yes, Raphael I agree, oh…but if you only knew; …Some things remain unseen to thy lacking sight
For the blight in your perception is evident to the relevant soul that is I…
I, whose mind art chambered with secrets, like one of why is it that I last beyond the calling grave
Or why I dare to call the goddess Rosaline, my beloved, having her image upon my heart engraved
For a shadow in that cosmic Eden belonging to a valley I am evermore enslaved…
Pray, these secrets I will tell you, anointed angel of past dreams
Undertake a chance, that I maybe trudging towards a noble essence to make nightmare into daydreams
And perhaps I may no longer be a villain…only an abomination tormented by his prior deeds

Raphael to ask “What do you mean?” 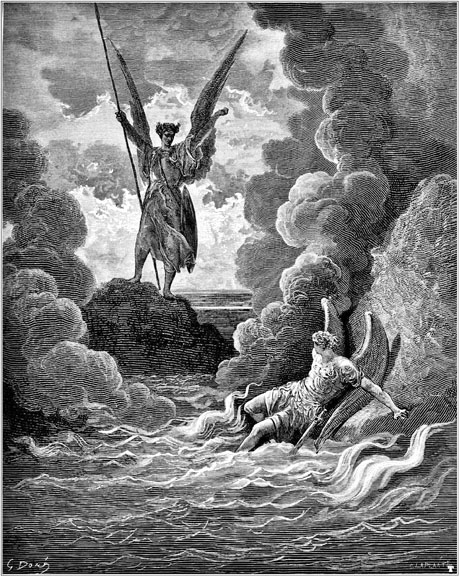